You are here: Home / Affiliate Updates / The American Health Council Physician Board Chooses Vincent Ohaju, DO,... 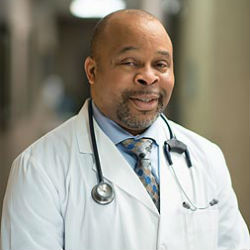 Vincent Ohaju, DO, FACOS, FACS, has been chosen by the American Health Council for their Physicians Board. He is currently the Trauma Medical Director at CHI St. Joseph Health Care Center and specializes in Trauma Medicine and Surgery. Dr. Ohaju is also known for performing mission work and establishing the Voom Foundation; an organization dedicated to raising the standard of health in Nigeria.

As a student, Vincent Ohaju attended the University of North Texas Health Science for his Medical Degree and for the fulfillment of his residency. After, he accepted a fellowship with the American College of Osteopathic Surgeons where he received his Doctoral Degree in Osteopathic Medicine. During that time, he became certified to perform Osteopathic Surgery by the American Board of Surgery.

Dr. Ohaju became very passionate about his career because something tragic had occurred in his personal life. He lost his father, who was fifty-six, in 1983 from a pulmonary aspiration that could have easily been prevented with a simple procedure. Going through such a travesty inspired Dr. Ohaju to attend medical school so that someday he might save someone else’s loved one. With no money for tuition, Dr. Ohaju could not fulfill his dream or honor his father in the only way he knew how. A nurse offered to pay for his tuition and gave him the chance to make his dream a reality. He was able to work and attend school in the United States and to this day, he is grateful for that nurse and the opportunity she gave him to change his and others lives. He loves his career and tries to make every decision towards its advancement count.

Medicine, both in the Physical and Mental aspects fascinated Dr. Vincent Ohaju. Originally, he planned to become a Cardiologist but during his fourth year of Medical School, he had spent some time in the Trauma Department. That experience alone changed his plans and he began to concentrate on Trauma because it provided the combination of surgery and medicine that he was looking for. The passion and hard work that he applies in his work has become the reason for his success and it continues to excel his career each day.

With the Center bringing in approximately 1400 trauma patients each year, Dr. Vincent Ohaju’s workday can become very demanding. He oversees an entire team of surgeons for a Level 2 Trauma Center and as a member of the Regional Quality Council, he is responsible for his clinic’s degree of quality and education. He is also in charge of providing mission work for the University of Nigeria Teaching Hospital, where he educates and trains practitioners. He is required to do two missions with them each year.

With such a rich background, it is no surprise that opportunity comes easily for Vincent Ohaju, DO. He has proudly served time as a Principal Investigator for several Clinical Trials that have been performed. He has accepted awards from Duluth Superior Magazine naming him the “Top Doctor” for seven consecutive years. He was pronounced the Community Physician of the Year in 2007 and 2011. But his proudest moment, was when he established the Voom Foundation. Over 300 patients have successfully undergone open heart surgery since 2013 when the foundation began doing missions. Dr. Ohaju has reached out to many impoverished families in Nigeria and provided them with healthcare they could never receive on their own.

Vincent Ohaju, DO, is a supporter of several organizations such as Cardiostart International, the Silver Creek Institute, and Rotary International.

Currently, Dr. Ohaju is working on making St. Joseph’s the best institution for patients in his local area. He would also like to see their programs expand and wants to upgrade his Trauma Level Two Clinic to a Level One.

When he isn’t enjoying the time spent caring for his patients on mission trips, Dr. Ohaju enjoys playing racket ball.