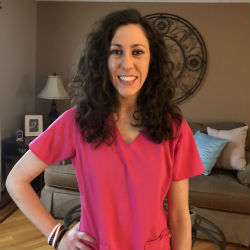 The American Health Council appointed Megan Schenk, OTR/L, PAMS to its Occupational Therapy Board. An occupational therapist at Tender Touch Rehab Services, LLC in Lakewood, N.J., Ms. Schenk treats patients who range from 50 to over 100 years old. While she has held her current role for three years, she has spent that time expanding her skills and knowledge in geriatric rehabilitation and hands-on techniques and advocacy to ensure that her patients receive optimal care.

Ms. Schenk launched her career at Tender Touch Rehab Services, LLC, where she continues to teach patients how to act upon the occupational therapy motto, “Living life to its fullest.” She develops individualized treatment plans for her patients to help them return to their prior level of function as well as educate interdisciplinary team members on how to safely carry over each treatment plan. She occasionally conducts home visits for patients who are preparing to discharge home with family or independently and assesses their safety while performing glimpses of their daily routine. Additionally, Ms. Schenk is a strong advocate for her patients’ care and strives to encourage each patient to be the best version of themselves. She has had the opportunity to treat workers compensation and outpatient cases that focused specifically on orthopedic and low vision conditions after traumatic events. She is also responsible for mentoring certified occupational therapy assistants (COTA) on staff and aspires to bring a positive influence to her workplace.

Among her many accomplishments, Ms. Schenk is proud to have obtained her Physical Agent Modalities certification and achieving Mentoring Level Student I during clinical fieldwork in preparation to becoming a certified occupational therapist. She has received numerous letters from her patients and their families thanking her for her hard work and devotion to her patients. She has been an active member of the American Occupational Therapy Association (AOTA) since 2013 and attended the association’s upcoming conference in Salt Lake City. She attended last year’s conference in Philadelphia, honoring the 100th anniversary of the founding of occupational therapy as a healthcare profession.

In her free time, Ms. Schenk is an avid runner and has participated in an array of marathons and half-marathons. She is a two-time marathon finisher, as she completed the Walt Disney World Marathon and the TCS New York City Marathon in 2016 and 2017 respectively. She also completed six half-marathon races, including the Rock and Roll Half Marathon in Philadelphia in 2015 and 2016, the Skunk Cabbage Half Marathon in Ithaca, N.Y., in 2015 and the United Airlines NYC Half Marathon in 2017 and 2018. Additionally, she enjoys going to Broadway shows and supporting the arts, as this was one of her childhood hobbies — along with playing the piano and singing. She enjoys traveling and strives to become more culturally-aware to better help her patients.

Ms. Schenk attributes her success to the support of her family, her parents and grandparents, as well as her college professors, classmates and teammates for consistently influencing her to be the best healthcare professional and mentor to her patients. In the future, she plans to gain membership to the New Jersey Occupational Therapy Association and the New York State Occupational Therapy Association to further engage in professional events. She plans to become board-certified or specialty-certified in an area of interest, including geriatric rehabilitation, mental health, low vision, etc. Additionally, she would like to enroll in hand therapy courses and possibly pursue a career in that field. Lastly, she plans to become more aware of research studies that involve her areas of interest in occupational therapy.

Alessandra Bertolucci, MD is Selected to the American Health Council’s Board...
Scroll to top